A Man of Fewer Words

A Man of Fewer Words

Every day, Martin Howard Nielsen vowed to be a man of fewer words.
Over the years it had become a kind of aphorism, a personal dictum: Use fewer words. He relished the new terms people would select for describing him: Terse. Laconic. Taciturn. Enigmatic. Maybe even—severe.
But by the end of every day Martin cringed as he heard himself struggle yet again for the right verb, the perfect descriptor, the succinct phrase, and once again he reproached himself: Next time, fewer words!
Every night when his wife, Martha, turned off her bedside light, Martin put down his book, folded his reading glasses and kissed her good night. Then slowly, softly, Martin began reciting aloud a recap of his day and plans for the next. By the time Martha’s breath assumed its steady, nocturnal cadence, Martin was narrating his memories, wishes, and worries in words that curled and twined up the lattice of night air like tendrils of ivy.
Oh, if only, Martin told himself, he was more like his brother Ed. “Now, that Ed,” people would say in unfettered praise. “He’s a man of few words!” Even his name was concise. New customers at the lumberyard were rattled by this decrepit man who took their order with no more than a grunt and a blank stare, but long-timers knew to entrust him with their lumberyard free-verse: two-hundred-foot, rough-cut one-by-six; fifty-foot two-by-four; half-pallet, single-bead T&G. Martin grinned each time a college boy came in, proudly building the world’s first bookcase, or a roof rack for his car. The boy would squirm as he waited for Ed to jot down his requests, to no avail. When Ed hobbled off to fulfill the order, Martin would try to strike up a chat with the youngster, with little success. But when Ed returned with everything the boy asked for, adding, “Threw in a couple extra of them brackets. Tend to bust ’em if you’re not used to ’em,” the kid would thank Ed with the reverence most men reserve for their minister. Use fewer words, Martin admonished himself.
How simple it seemed. But his words entangled and choked him, growing as they did with feckless abandon. Once he had seen a dead cottonwood kept erect by the wisteria scaffolding its trunk and branches. That’s me, Martin thought: a hollow core held up by my words.
And still Martha slept.
“Martha,” Martin said aloud. His wife was a miracle of consistency. Every day she pulled her long, straight hair back from her face and clipped it with a drugstore barrette. Every day she wore a long, pleated dark skirt and puffy-sleeved white blouse. Hers was the shape of life, Martin thought, the round face, wide hips, shoulders of a horse.
“Nip it in the bud,” Martha would say. That dictum was hers. When a customer at the lumberyard complained, when their son had a disagreement with his wife, Martha would say, “You’ve just got to get right in there and nip it in the bud.” Life’s most ungainly problems could be resolved handily, it seemed, if only one were quick, cunning, and kept one’s tools finely honed.
“Martha,” Martin said, louder this time. And again: “Martha.” It was a heavy name, laden with consonants. He tried to imagine her with the name of a flower: Rose, or Lily, or Zinnia. Who might she have been as a Dottie, or an Annabelle? Sometimes he tested her as she slept: He was attracted to another woman, or an old friend had just died. Her breath held steady. He longed to fall asleep in just this way, as a child is lulled to peace by a parent’s voice.
As the trellis of consciousness gave way to the world beyond words, Martin closed his eyes. “My Martha,” he said, softer now. “My flower. My blossom with roots to the core of the earth, seeded in fire.”
Just before his fingers loosened their grip on the day, Martin remembered the afternoon many years before, as he unpacked from a fishing trip with Ed, when his Martha let slip that she had turned on an all-night talk-radio program before bed while he was away. Martin held that as a small, quiet victory.
Martin turned out his light. “Leaping into grace,” he murmured, “I find Martha.” And nestled in the silent blue sway of the imperturbable arms of the unflappable night, Martin slept.

____________
“‘A Man of Fewer Words,’ with its embrace of the power of words even when one eschews using them, is a funny and sweetly moving love story that steals up unawares to surprise the reader with its mercy and patience and heart. Martin’s litany of his life to his falling-asleep wife shows us the importance of words to our lives no matter what.”—Bret Lott, Final Judge, 2018 Able Muse Write Prize (for fiction) on this runner-up story, “A Man of Fewer Words” by Claudette E. Sutton. 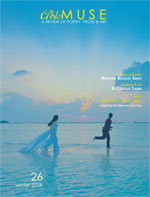