(in which the Latins prepare for war against the Trojans)

Long unstirred, becalmed, Italy
Instantly erupts in martial fury:
Foot soldiers flood the fertile fields
As lords on horseback strut behind their shields,
Trampling the earth to a frenzy of dust.
Each man seeks the weapon he loves most:
Some polish spearheads till the steel gleams;
Some burnish armor, massaging the seams
With grease and lard; some slowly hone
The blades of axes on sleek whetstones.
All are proud to let their pennons fly,
And all rejoice at the trumpet’s cry.

Five of the greatest and chiefest of cities
Bring to blazing life their weaponries:
They fashion forges whose steel anvils ring:
Rich Atina, and haughty Tiburine,
Ardea the jewel, and Crustumerium,
And Antemnae graced by tower and column
And ringed all round with war-proof walls:
In each city’s forge the hammer stroke falls,
As smiths well-skilled in metal and flame
Summon forth breastplate, barding, and helm,
Bend willow branches to brace their targes,
Stretch leather on bucklers to shield their charges,
Knit hauberks together, link by steel link,
Buff poleyns, schynbalds, and faulds for the flank,
Enameling each piece with the star-shine of silver.
Hungry for iron and steel, they pilfer
Plows for coulters, soams, and shares;
Likewise, all scythes and harvesting shears
Are brought, dismantled, and recast:
The tools of peace are now things of the past,
Wholly transformed into weapons for knights
To safeguard their country and maintain their rights.

Once they assemble their weapons and gear,
The draft-trumpet blasts the challenge of war.
The command is passed from rank to rank:
“The battle draws nigh; we stand on the brink.”
The foot soldier tugs his helmet down
To muffle his fear in the din of the throng.
The charioteer drives his steeds to the yoke;
They stamp and snort and sweat and smoke.
The captain swaggers behind his great shield,
Wrapped in his hauberk of steel laced with gold.
His corslet, breastplate, and terrible sword
Have cut from their tongues the plow’s peaceful word. 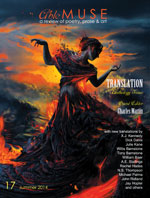