You’ve just picked up Theodicies for Loners.
The lipsticked tell-all of a made-up man.
Rebuttal to the post-postmodern cool.
Alternate bull’s-eyes for the wrecking ball.

You’re holding a worrystone for a child’s hand.
A keepsake lifted from the excavation.
The part of the plant that’s richest in nutrition.
A STAR MAP to the mansions of the dead.

You’ve opened up Pandora’s other box.
The velvet buckle and the buttonfly.
The secret exit, wired with alarms.
You, too, are implicated in my schemes. 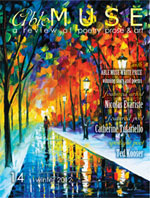